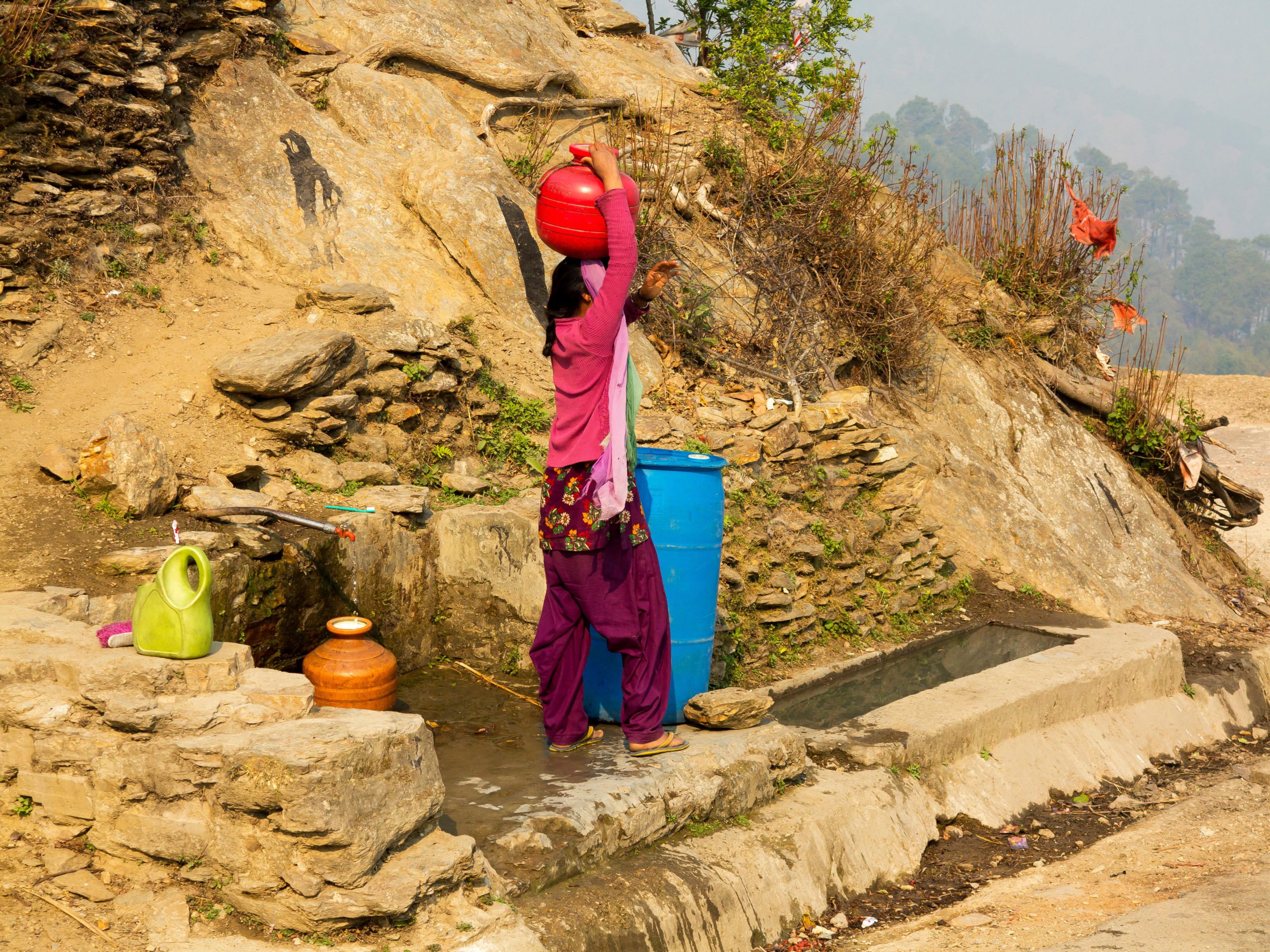 Spring 2020 had just begun in the Himalayas but for Kamla Devi, 36, a resident of Nathuakhan village, in the north Indian state of Uttarakhand, the changing of the seasons was different. The water level of the local spring had remained unusually low compared with previous years. Devi said, “Summers are the hardest, our spring dries up and we are required to fetch water from far-off places.” But as the winter snow melts water is usually plentiful. This was not the case last year, she said.

Springs, rivulets and ponds are the veins of the Himalayas’ water system and are fundamental for sustaining livelihoods, and supporting the cultural heritage and collective well-being of mountain communities. Like Kamla Devi, many people in the Himalayan region are experiencing climate change impacts such as an increase in extreme precipitation events and longer drought periods.

Climate change continues to impact the availability, quality and accessibility of potable water resources in the Himalayas, as confirmed by the Hindu Kush Himalayan Monitoring and Assessment Programme (HIMAP) report by the International Centre for Integrated Mountain Development (ICIMOD). Studies quoted in ICIMOD’s assessment found that almost 50% of perennial springs in the Indian Himalayas, including in Uttarakhand, have dried up or become seasonal because of climate change and unplanned urbanisation in the region.

According to a 2018 report by the Indian government, less than 50% of Uttarakhand’s population has access to adequate quantities of safe drinking water. As a result, the call to revive springs in the mountains is becoming louder and more urgent. In Uttarakhand, the Central Himalayan Rural Action Group (CHIRAG) and other prominent civil society organisations are working to empower local communities to take up sustainable land management and rejuvenate their springs.

To achieve measurable and replicable results, CHIRAG has deployed a practical method, originally inspired by a more technical process designed by the Pune-based Advanced Centre for Water Resources Development and Management (ACWADAM).

Researchers teach local communities about mountain geology and explain how water flows beneath the rocks, to help them understand how rivulets form and travel underground before reaching the surface. They involve residents in creating recharge structures such as contour trenches, deep pits and percolation pits, which in turn help revive the springs. Rainwater collects in these pits during the monsoon, and between late June and early September soaks into the aquifer, rather than running off the land. This process also helps protect the local vegetation, preserving soil integrity. 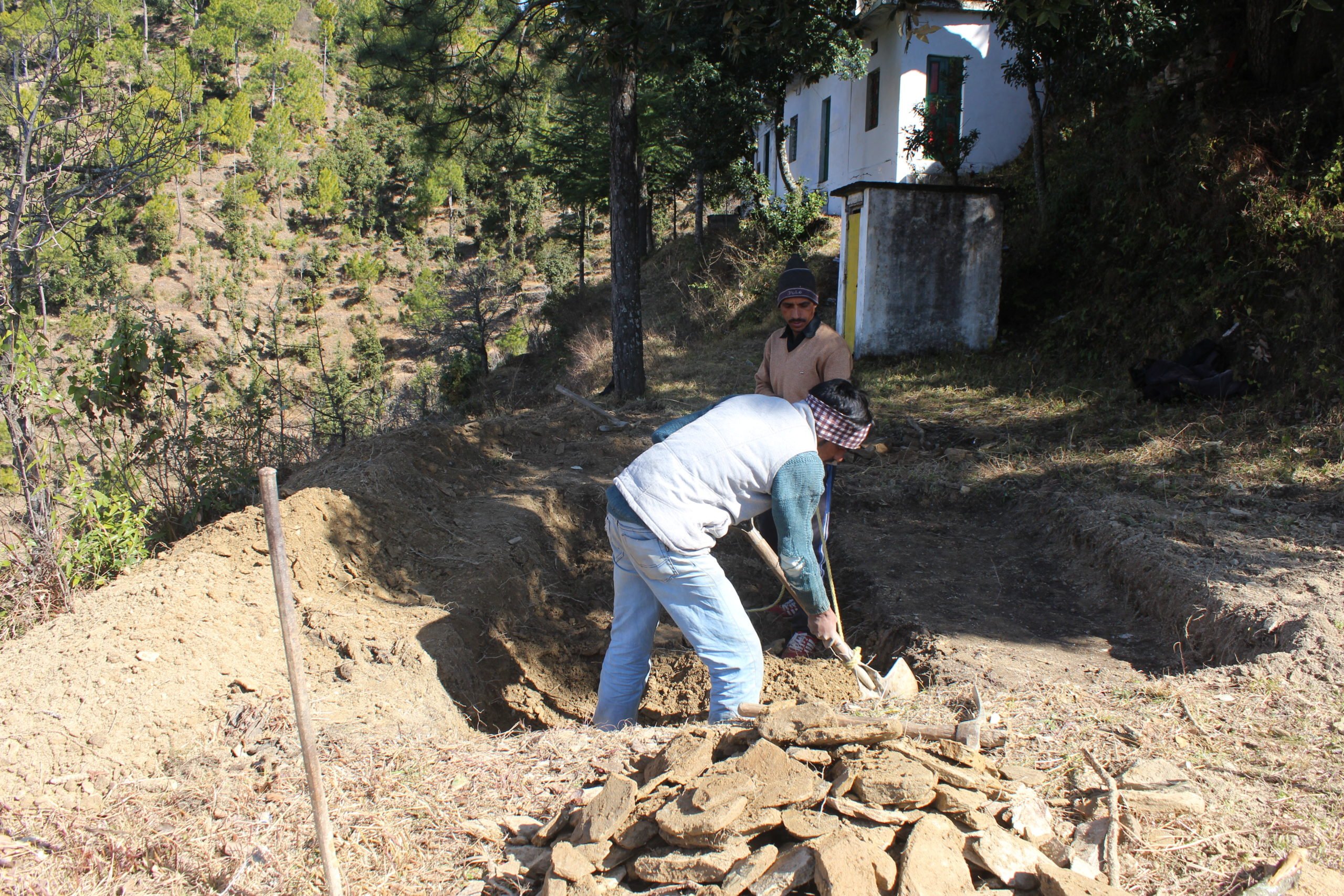 The Centre for Ecology Development and Research (CEDAR, a research-based NGO in Uttarakhand) is studying the health of springs in Nainital, the district where Devi’s village Nathuakhan is located. CEDAR is also gauging the participation of local residents as citizen scientists through field visits. The ongoing project, led by CEDAR in partnership with CHIRAG, started in late 2019. By 2021, it was showing results.

During a visit by the CEDAR research team, we encountered Vimla Bisht, a resident of Nathuakhan, as she pruned small pine trees with other women in one of the critical ‘recharge zones’ where rainwater naturally collects and percolates into the aquifer. The 38-year-old told us that pruning trees and removing invasive weeds helps preserve the vegetation growing in recharge areas, as well as creating space to plant more trees. The branches cut by the women can be used at home for various purposes, she added. 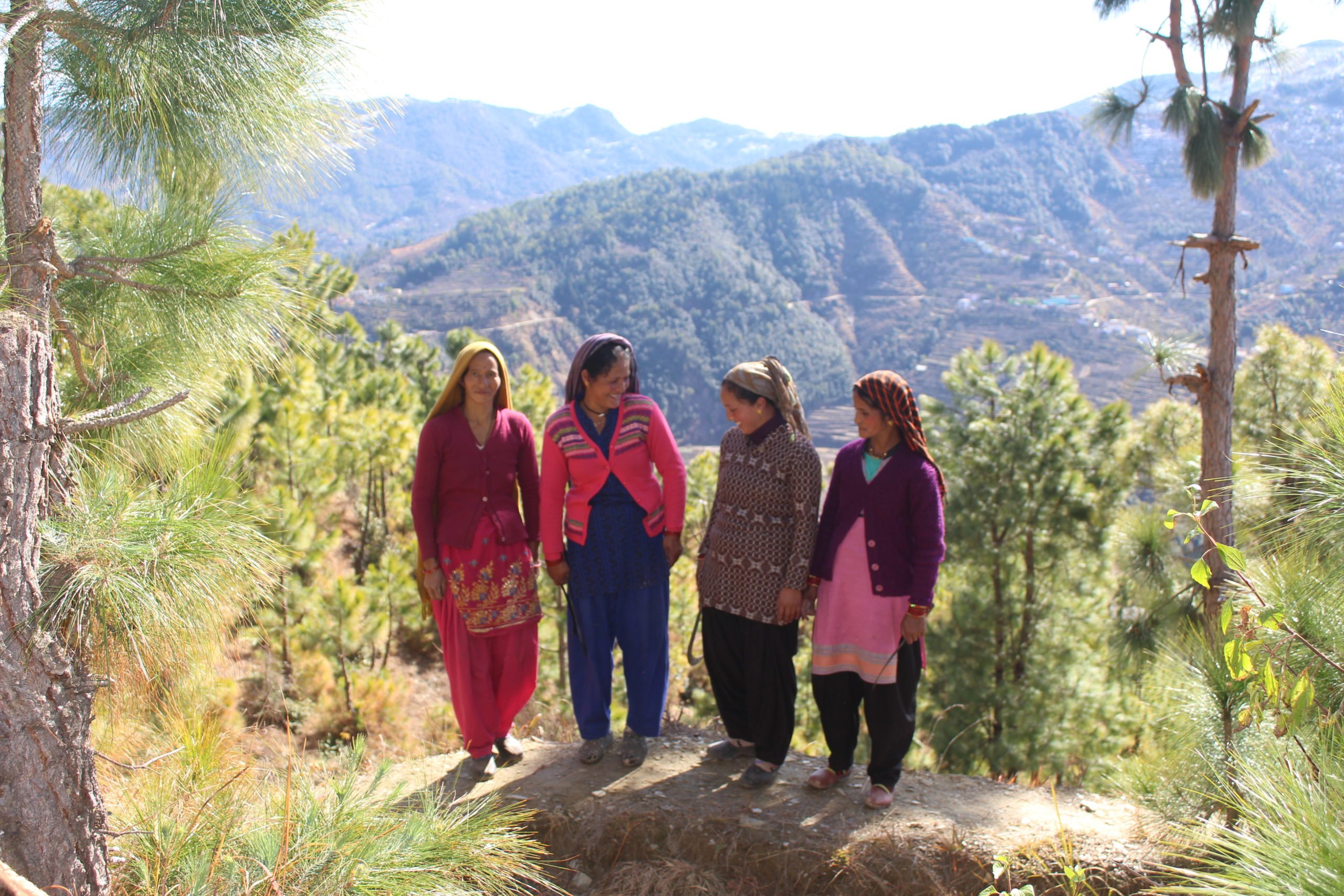 Vimla Bisht and her friends after pruning trees in the ‘recharge zone’ (Image: Manya Singh)

After testing their method on more than 400 springs in the lower Himalayan Kumaon region (one of the two divisions of Uttarakhand state, a region of rich biodiversity), CHIRAG researchers found that the method is both effective and replicable in a wide range of natural settings. Surendra Negi, a team leader at CHIRAG, said, “This springwater-revival method resonated with locals.” One doesn’t need to be a scientist to understand the science behind the rejuvenation process, Negi explained. An intermediate level of education is enough to engage with the scheme, something that is crucial to its success. “Community engagement,” he added, “is the backbone [of the project’s] replicability in Uttarakhand.”

Vimla Bisht’s community has emerged as an agent of change through their efforts to rejuvenate the Mandir Naula, or Temple Spring, in Nathuakhan which was becoming water-scarce.

Villagers are working with CHIRAG to collect data on geology, water quality, quantity and resource use. Using Google Earth and the open source geographic information system QGIS, the community creates a treatment area map which is used for various spring-recharge activities such as building recharge structures, plantation drives and removal of invasive species.

CHIRAG team members Bishan Raikwal and Hema Bisht say that this method largely relies on community engagement. This takes the form of shramdaan (voluntary contribution of time and labour), offering private lands for constructing recharge systems and contributions to the Operation and Maintenance Funds (about 20 Indian rupees per year per beneficiary household) to pay for maintaining the structures, planting vegetation and caretaking activities.

The work is implemented through a water user committee, a democratic body locally referred to as ‘Jal Upbhokta Samiti’ that is tasked with the management of local springsheds. Its members develop scientific skills that they then apply to spring data management and recharge operations, also liaising with a village-level government body (gram panchayat) for land clearance to conduct recharge activities.

The members are trained as para-hydrogeologists who help identify a geological recharge area map followed by a geological survey. CHIRAG weaved these steps into a training module that can be applied to spring areas across Uttarakhand. “We function on a rotational basis in which two-three members from a household join for shramdaan, volunteer help and contribution,” resident Dikar Singh explained. 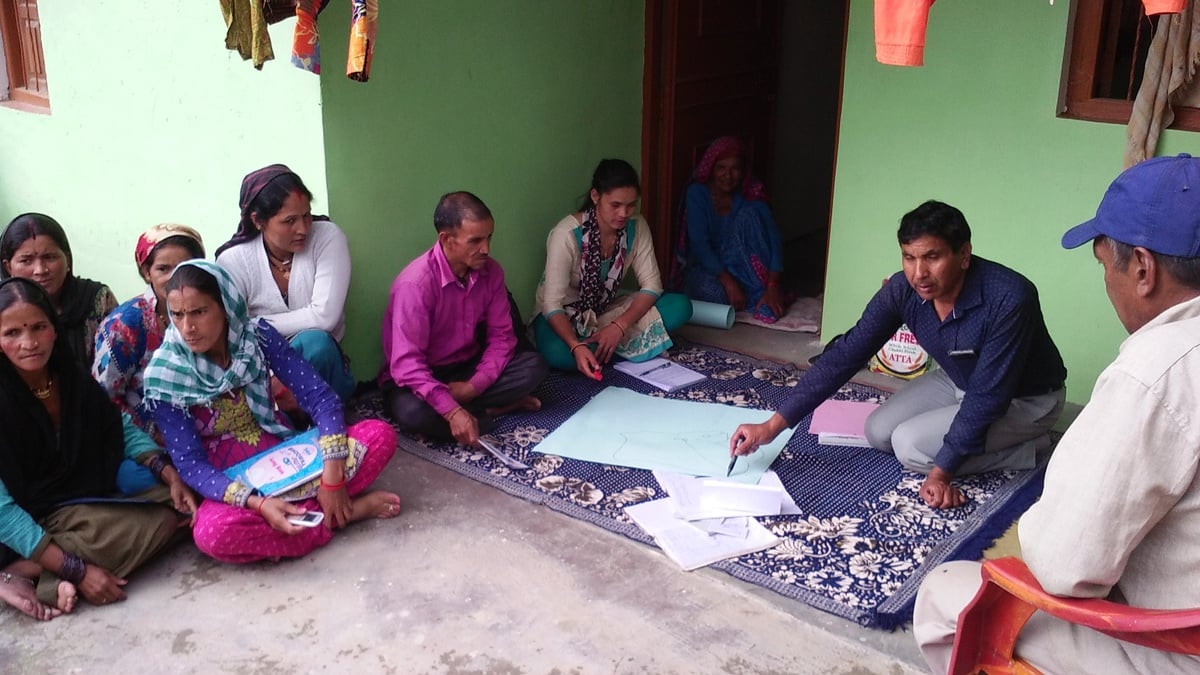 An orientation meeting for the water user committee at Nathuakhan (Image: CHIRAG)

Another member of CHIRAG, Vikram Raikwal, demonstrated his flair with a spade. On a heavily inclined slope, he dug a cubical percolation pit. “The water running off from the hilltop will be trapped in this pit,” he said. “In turn, a network of interconnected trenches feeds a number of deep recharge pits.” These, he explained, will hold water and recharge the groundwater aquifer through infiltration.

One major challenge to the successful implementation of this method is acquiring land identified by the treatment area map from private owners, van panchayats (village-level forest institutions) and the forest department. Other than this, maintaining the body of scientific knowledge among the community which produces timely data from the ground is a challenge in itself. 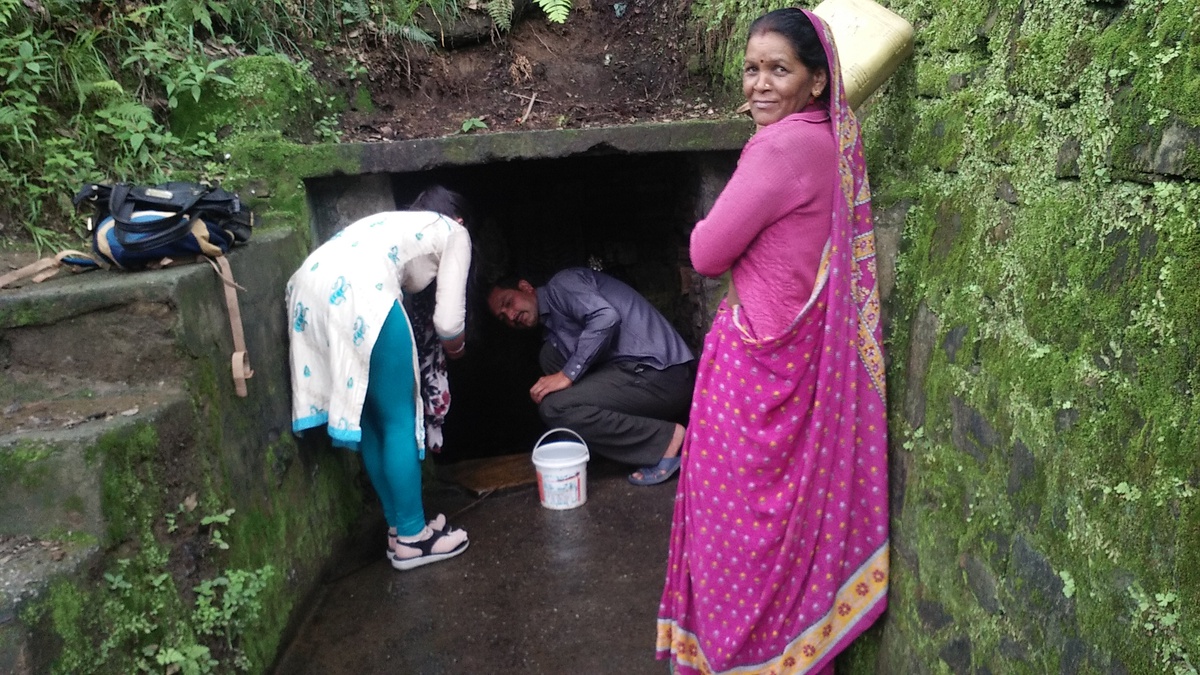 Water insecurity is felt differently by men and women. Since water management is traditionally a woman’s duty, women face unique physical challenges due to the long hours they invest in fetching water, often from distant locations. Involving rural women in livelihood initiatives has been the core strength of CHIRAG, which has created a space for better gender representation.

Still, despite being involved in the spring-rejuvenation programme, women tend to take up fewer decision-making roles. Only a few villages have shown unexpectedly high female participation, and traditional patriarchal rules remain a challenge to this shift.

Spring rejuvenation is already showing its potential to mitigate, and in some cases reverse, the growing issue of water scarcity affecting the region. Between last spring and this summer, Kamla Devi went from walking two-three hours a day to collect water, to just 10 minutes. After the springshed treatment, the Mandir Naula brims with water again. Devi, an active member of the water user committee, is hopeful that after the rejuvenation process her local spring will stay healthy for years to come.

Manya is a researcher at the Centre for Ecology Development and Research (CEDAR) , a Dehradun-based not-for-profit organisation.

This article was originally published on The Third Pole under a Creative Commons licence.